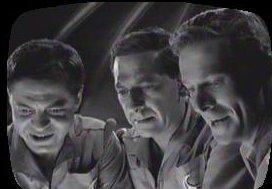 According to this news item from the Sci-Fi Channel (who canceled Farscape, which had the Klugman-esque D'Argo), plans are afoot to remake a Klugman classic.

We would like to know the name of the individual who dares tamper with greatness - not just one of the greatest Twilight Zone episodes ever made, but one of Klugman's greatest performances.

Is there no depth to the ignorance of Hollywood executives.

(We realize that is an Orson Welles quote).

We only hope that Mr. Klugman either gets a cameo, and/or a huge amount of money.

No steak and bourbon for Hollywood. None whatsoever.
Posted by Church of Klugman at 10:55 AM