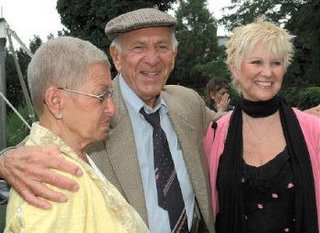 Plus, a funny site featuring a classic Klugman character.
Posted by Church of Klugman at 11:11 PM

I thought you would find this article by Mark McGuire, the TV critic for the (Albany, NY) Times Union:

When a new TV doesn't make the gift list

"Tony and Me," by Jack Klugman ($19.95). The memoir chronicles the close friendship between "Odd Couple" co-stars Klugman and Tony Randall. (Randall died in May 2004.) Through http://www.tonyandme.com, you can get the book, a DVD of outtakes and a vintage photo and Mets cap -- both signed by Klugman. For only $29.95!

I bought two. I'm not the only devotee out there. Read on.

A fan shuffles off

The sudden death Sunday of Glenville attorney Jonathan Wayne at the age of 46 was untimely. The date of his passing was not.

From the first paragraph of his short obituary, as it appeared this week in the Times Union:

Odd wording for an obit. Until you consider that Jon Wayne, like many members of his family, was an "Odd Couple" fanatic.

Each episode of the ABC comedy began with the same narration: "On November 13, Felix Unger was asked to remove himself from his place of residence. That request came from his wife. ... "

The obituary's phrasing was a nod to Wayne's fandom, and how his family bonded over the legendary sitcom.

"Even before the sad events that took Jon from us, Nov. 13 was always a family holiday," said his brother, Douglas Wayne, an attorney from Doylestown, Pa. "I wondered if it would be appropriate to write an obituary that would make people smile. Then I thought of my brother. ... He would have liked it."

Three decades after the show went off the air -- and despite never doing well in the ratings -- the TV version of "The Odd Couple" still occupies a warm spot in many people's hearts. (The current Broadway revival of Neil Simon's original play, starring Nathan Lane and Matthew Broderick, is sold out.) The Waynes are not the only ones who make note of Nov. 13: There are many of us who wish people "Happy Odd Couple Day" on that date.

"I called him every November 13. It started in high school," said his mother, Barbara Wayne of Albany. "As he got older and he went to Brown and Albany Law, it became a tradition."

The family only paused for a moment before deciding to put the homage into the obituary.

"I'm sure he would get a big kick out of it," his mother said. "We didn't think it irreverent. We thought it was Jono."

Mark McGuire can be reached at 454-5467 or by e-mail at mmcguire@timesunion.com.

I'll ask Santa to send you plenty of steak and bourbon.

I'm a co-author of the "funny site" which is linked above. I hope that people find it amusing. However, unless you are a fan of the cartoon talk show "Space Ghost Coast to Coast", you will miss the inside joke. In one episode of the show, bandleader Zorak wants Space Ghost to do a musical tribute to Jack Klugman. (You can see a transcript of the show here).